Home › Insights › IRA Conversions: What You Need To Know

IRA Conversions: What You Need To Know Q: What exactly is an Individual Retirement Account (IRA) conversion and why would I want to take part in one?

A: An IRA conversion, sometimes referred to as a Roth conversion, is a scenario where an individual is either at or nearing retirement and has a large sum saved or invested in their traditional IRA, meaning they have contributed to that IRA over time or rolled other retirement accounts into it, but have yet to pay taxes on those dollars. Without a Roth conversion, that individual would likely begin to draw on their IRA for living expenses in retirement, but in the process, they would also be paying income tax on any amount withdrawn due to the lack of prior taxation. Initially when a client is in their 60s that may be fine, but once the client reaches age 72, they enter Required Minimum Distribution (RMD) status and must begin withdrawing increasingly larger percentages from the IRA or face a significant tax penalty.

It’s not uncommon in this scenario for an individual to be forced to withdraw more from their IRA than they need in a given year, leading them to recognize income and pay taxes on money they don’t really need. A Roth IRA conversion mitigates this problem by taking either a portion or the entirety of an individual’s traditional IRA, withdrawing it from their account and paying taxes on the amount withdrawn, then contributing that amount to a Roth IRA account. Once in the Roth IRA, funds can grow tax free, just like the traditional IRA, and may be withdrawn income-tax free later if certain rules are followed

Q: How do I know if I’m a candidate for an IRA conversion? Does it apply to me?

A: While situations can vary drastically, the most common candidates for an IRA conversion are likely either at or nearing retirement. Maybe they have cut back their hours at work and are making less than they have in years past, or they have stopped working entirely and will commence living off their savings. This latter scenario is generally the most advantageous time to conduct a Roth conversion, because the individual’s income bracket will likely be the lowest it’s been in several years due to lack of employment income. While the one-time withdrawn amount may be taxed at a higher bracket due to its large size (if done all at once), individuals can also elect to space out their conversions over several years while living off of other retirement assets that may have more favorable income tax treatment in a lower tax bracket. The important thing to remember is that every individual’s situation is different, making the need for an informed analysis imperative to the success of this strategy.

Q: What’s the time frame on making an IRA conversion? Can I do it overnight?

A: Generally, the time frame to process an IRA conversion is relatively quick. The portion being converted will be liquidated in the traditional IRA, then distributed out of the account and directly deposited into the Roth IRA. That process can generally be done in a matter of a few days. The more important considerations for this strategy are the tax years impacted and the length of time the newly transferred funds are held in the Roth IRA prior to distribution.

Remember that any funds distributed from the traditional IRA are taxable in that year, so spacing out larger sums over a few years may lead to a significant savings. The most important rule following the conversion from a time perspective is tracking the number of years that pass. For the individual to withdraw funds from the Roth IRA tax free, they must hold the newly transferred funds in their Roth IRA for five years. Failure to follow that five-year waiting period may also result in the individual paying a 10% penalty on withdrawals from the Roth IRA.

Q: I can’t currently contribute to my Roth IRA due to my high income. Does that exclude me from this conversion?

A: While high-income earners are not excluded from Roth IRA conversions, it’s generally advisable that they wait until their incomes decline so they aren’t taxed on the conversion in a higher tax bracket. This generally occurs during retirement. It’s important to note, however, that IRA conversions in general can be helpful to high-income earners via what’s referred to as a “backdoor” strategy. Allow us to explain.

Typically, married couples or single filers making more than certain IRS defined annually adjusted income amounts are prohibited from contributing to a Roth IRA. A way to work around that limitation, though, is for high-earning individuals to make contributions to their traditional IRA (also up to similar annually adjusted amounts), then convert that IRA contribution into a Roth IRA during the same year. While the individual will similarly have to pay income taxes on the converted amount, it provides them with a means of funding an account that will allow them tax-free distributions later in life that they otherwise would not have been able to access. 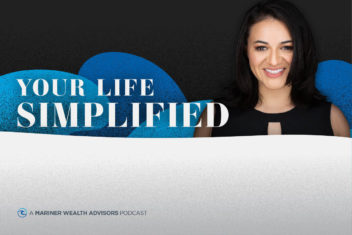 In this week’s episode of Your Life Simplified, Valerie Escobar , senior wealth advisor, and Christina Lynn, practice management...
Tune In As the year wraps up, you’ve most likely met with your wealth advisor about tax-advantaged moves to make by...
Read

In this week’s episode of Your Life Simplified, Valerie Escobar , senior wealth advisor, and Christina Lynn, practice management...
Tune In